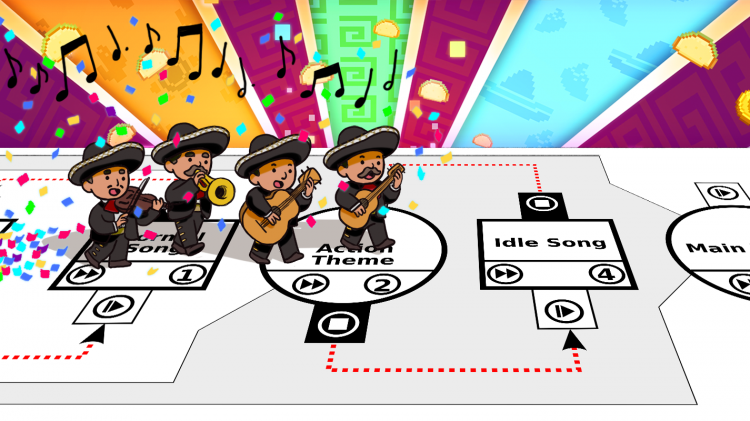 How to Plan the Jam: Making Videogame Music with External Collaborators

Video game development teams have always been known for being multi-disciplinary, conformed by people from different departments. Learning to communicate and understand each other is a continuous work in progress. However, there might be external collaborators who aren’t always around, and communicating with them is even more complicated. Such is the tale of musicians vs developers.

In our studio we don’t have any kind of sound designer nor composer, so when we’re developing a project we have to rely on a professional studio; just like we did on Mucho Taco! Where we found allies with Soundscape Studio.

The musical composition of a game differs with that of any other piece of media and it is wise to keep in mind the following considerations:

All these considerations were shared with Soundscape when we showed them the project and the art we had of it. They also played the demo version of the game. We shared some music tracks from different media (TV shows, movies, games) that we thought could serve as inspiration.

Using that information as a reference, the Soundscape team built different inspirational pieces to find the core concept for what would later become the main theme for the game. Here’s one of them.

Once both our teams settled on a melody, we explained to the musicians how the tracks had to be exported. Communication between the programmer and the musician was going to be an arduous task, so I realized we would most definitely need a diagram to visually represent the game flow and the exact moment where each track should be played.

I started to build my own nomenclature so programmers and musicians could understand each other, and the result after some iterations was this:

Displays the intro and outro behaviors of a Track Frame or Theme Frame.

For example, this is the music diagram for Mucho Taco!’s main theme:

A Theme Frame that loops indefinitely, which is composed of another Theme Frame and a Track Frame.

The track order is as follows:

For our game (Mucho Taco!) we designed several events which change the BG music. One of such events is the player-activated “Fiesta”. When it happens, the current track must stop and the “Fiesta Song” will be played instead; which is a track with a well-defined beginning and ending with a fixed duration.

Another BG music disruptive event is called “Mucha Suerte” which is triggered automatically. This event does not have a fixed duration and the player can stay on that event an indefinite amount of time, so it must have a track that is able to loop.

To ease-in the loop-able portion of the track, we decided to add an intro track that leads to it.

Indicates the beginning of the diagram. In our case, a mobile game means the player can open and close the game anytime, so any re-entry points must be highlighted on the diagram depending on the player’s progress.

Finally, we incorporated the game tutorials, which led the final diagram to look like this:

A simple diagram that efficiently shows the musicians how the tracks should be prepared.

Thank you for reading! Hope you find this information useful in your game making. If you enjoyed this post and want to check the music diagram working in our game, Mucho Taco, click this link and have a great #indiedev!